Like we’ve covered on so many posts before, for health purposes I avoid dairy when I can.  It’s not an allergy per say, but I was finding it was doing some funky things with my body, so I cut it out.  {{I’m sure I sound like a broken record about this at this point}}.

Anywho, I LOVE Chai Tea Lattes.  I even like a Dirty Chai every now and then when I need an extra pick-me-up {Chai Tea Latte + shot of espresso}.  Before my non-dairy ways, I was all about that Starbucks Nonfat Chai Tea Latte.  Recently I’ve had to change my ways.  There are a lot of awesome coffee shops around Charlotte that offer alternatives like soy and almond milk for that CTL {and it’s way cheaper that Sbux}, but what about when I want one at home?  For years I’ve tried and failed to master this creation.  Then one day while grocery shopping, I had an epiphany.

Keep in mind, this is a similar, homemade alternative to the Chai Tea Latte.  I don’t have an espresso machine or one of those handheld latte foamers…yet {<—–gift idea, anyone?}.  However, when you want to make one for yourself in the comfort of your own home, this is an excellent alternative.  It also cuts down on the amount of sugars and sweeteners you would normally come across at your run of the mill coffee shop.

Yes, that’s really it!  I clearly have a Trader Joe’s problem, but any of these ingredients could be found at your local grocery store.  I’ve tried almond milk and other milk alternatives in the past, but it never dawned on me to use alternative dairy creamer.

Here are the quantities:

1 Black Spiced Chai Tea Bag
8oz/1 mug of boiling water {I never actually measure this out to be honest, just leave room for cream}
1/2-1 Tbsp of Organic Agave Nectar {depends on how sweet you want it, I prefer 3/4 Tbsp but I know that’s being difficult}
2-3 Tbsp of Coconut Creamer {again, up to you on the exact measurements}
1 tsp of ground cinnamon to top
1/4-1/2 tsp of ground nutmeg to top

I’m all about finding what works for you.  I like to give approximations on recipes like this to let you know that you can hit anywhere within these numbers and not “mess it up”.

And now for the steps: 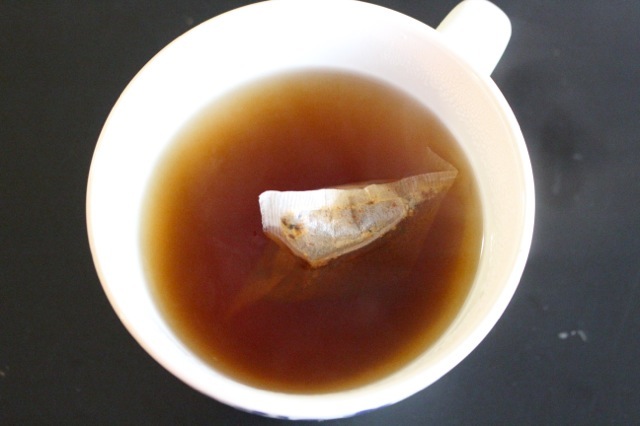 2.  Remove and strain the tea bag. 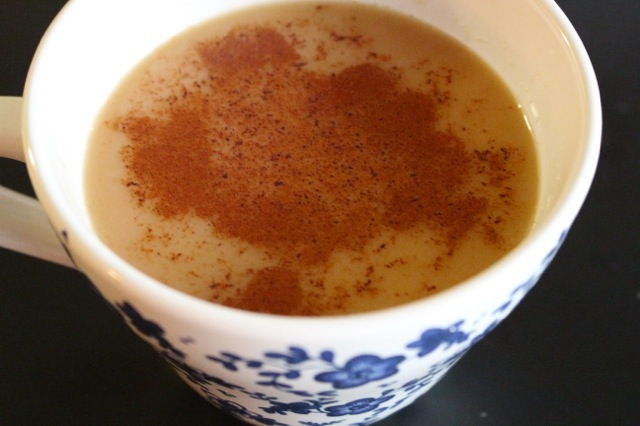 4.  Top it off with the cinnamon and nutmeg, and you’re all set! 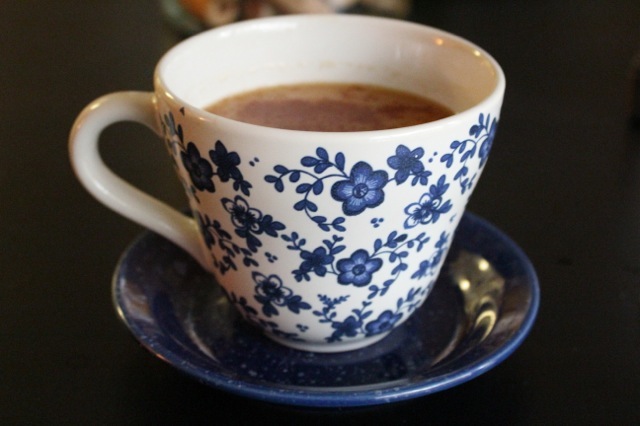 Don’t you just love the mug?  I found it at IKEA.

So, next time you’re at home and you’re craving a Chai Tea Latte sans-dairy, give this a shot!

Let me know what you think!  How do you make dairy free Chai Tea Latte’s?

Welcome, I'm so happy you're here! I'm Christine, a blogger who's recently moved back to NC, now living in Charlotte. I love learning about everything life has to offer. Do I take myself seriously? Rarely. Do I take living a full, healthy, and balanced life seriously? Always. It's all about the journey. So tell me, what are your "Skinny Fingers"?

The Fitnessista’s ‘Build Up Your Blog’